The conditions for triple-loop learning require that the enterprise becomes edge-driven. This places it on dispersive ground.  The identifications that need to be supported on dispersive ground are those involving triple-loop learning.  These identifications keep the organisation on the deliberative ground of politics on which differences can be worked through within East-West dominant forms of governance.[1] Refusal to engage with this leads to three other kinds of competitive behavior (Tai Chi, Sumo and Samurai), the consequences of which become most apparent in warfare.

Consider the balance between the will of the people involved with a membership organisation (ranging from a majority to particular networks of members) and the means acceptable to the people of the organisation (ranging from by-any-means to means restricted by the extent of collateral damage).  This is based on military ways of thinking about the relation between different types of warfare and politics.  It provides an insight into what is at stake for the leadership of an organisation dealing with growing differentiation in the demands of its members. With alignment, there is a symmetry between the will of the members and the means adopted by the organisation.  Without alignment, there is an asymmetry. 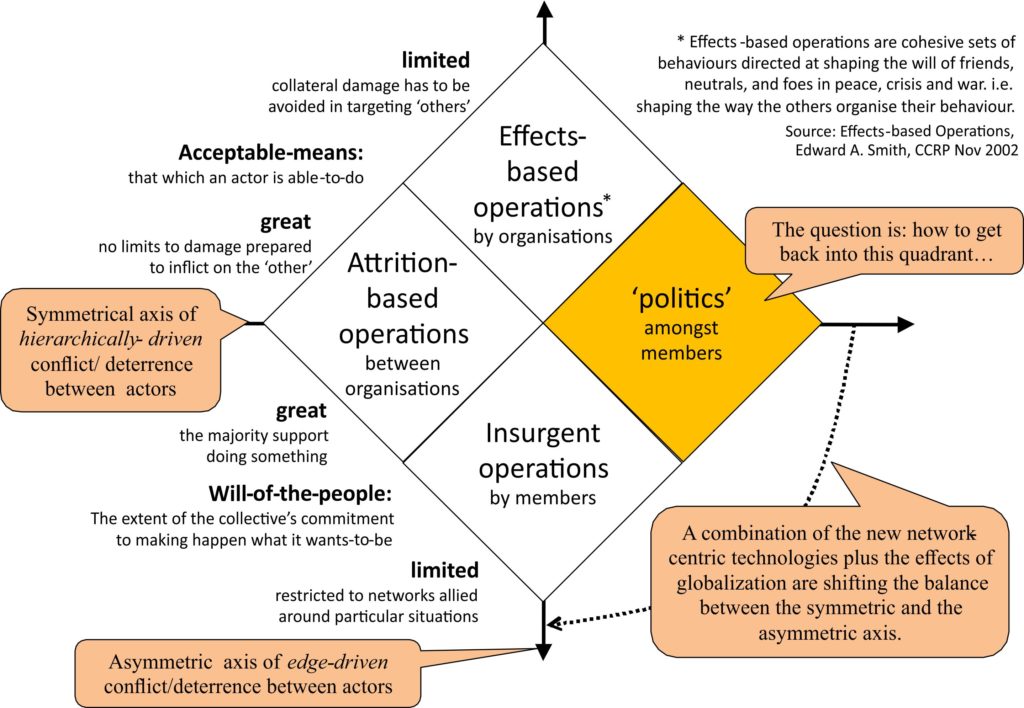 Looked at it in this way,

The danger of either asymmetric response arises from its enabling the organisation to postpone responding to and providing support for the growing heterogeneity in the way members meet demands. The challenge, of course, is for the organisation only to accept asymmetric responses as being on the way to operating on the dispersive ground of ‘politics’, ground on which growing difference may be lived with and supported – presenting leadership with the task of leading an organisation without boundaries.

These ‘nine-varieties of ground’ make it possible to distinguish three kinds of competitive behavior, depending on the nature of the ground.  The fourth ‘political’ kind involves developing leadership qualities that overcome the North-South bias:

Death ground is ground defined by the organisation’s formation being defined wholly by its affiliation to a past intent and not by its relation to the current situation(s) on the ground – it is as if the organisation has no choice but to fight to the death, which in an environment demanding dynamic alignment is very likely to be its own death!

This is in contrast to consultative process: