The goal of e-Government is to enable government to become more responsive to its citizens while at the same time reducing its costs.  We did a study for a government that wanted to invest in the use of on-line search capabilities. The problem the government faced was that there were insufficient direct revenues or savings to set against the value of such an investment, so that the normal approaches to establishing Return on Investment (ROI) would not work.  The approach we took was to approach the demand for on-line search capabilities as multi-sided, in order to establish the indirect value of the investment.

We considered four different types of search, corresponding to rcKP types of relationship to demand (the examples are taken from a presentation relating to this case):

We examined actual queries, establishing their variety and frequency and how these factors changed as the knowledge relating to any given domain of query matured (e.g. for swine flue in this case). We represented these queries in a multi-sided matrix, in which the columns represented individual services provided by different departments and organisations; and the rows were the different types of query.  A pattern of X’s along a row thus represented the collaboration between services needed to respond to the query in that row.  The matrix as a whole represented the variation in forms of collaboration needing to be supported by the architecture of the search platform.

Based on this matrix, we then modeled the way the organisation responded to it, identifying its associated costs: 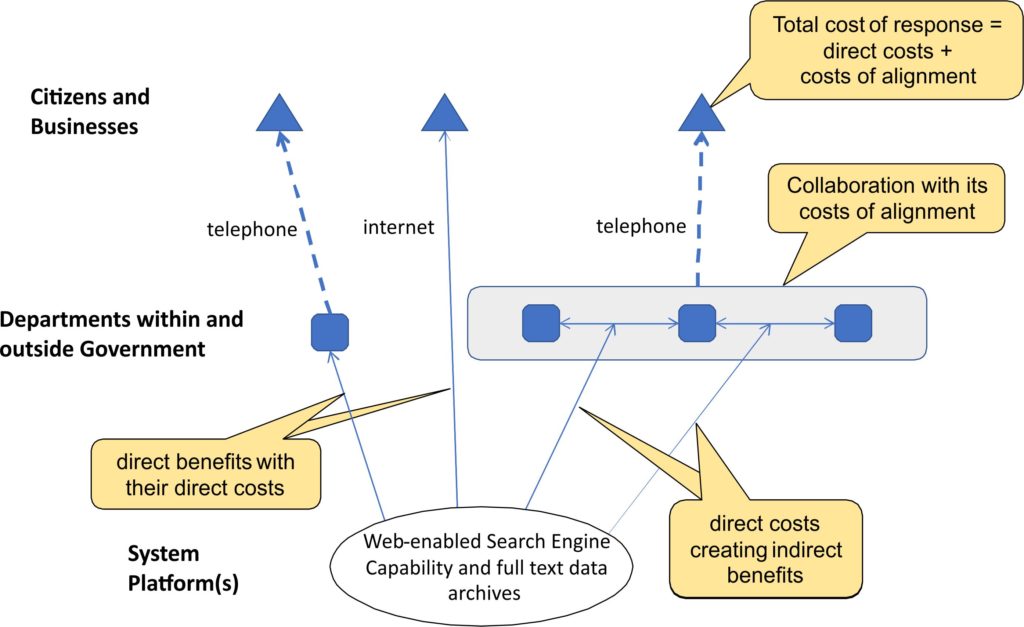 In the case of the r-type and c-type queries, direct benefits flowed from the direct costs of using on-line search.  But in the case of K-type and P-type queries, the indirect benefits that flowed from the impact of these direct costs were based on the government’s costs of alignment across the variety of collaborations.  We were able to analyse the value of these indirect benefits based on Monte-Carlo simulation of the change in the way the organisation could work using the search platform.

The architecture of the platform itself had to be able to support dynamic alignment processes, resulting in a solution that was 20% of the cost of the investment that had been proposed initially by the government.  The indirect benefits that flowed from the impact of this platform on costs of alignment were then further increased as the tempo of variation in the domains of query themselves increased, resulting in savings being generated of the order of 50% of the total savings over a static solution.   The conclusions we drew were that:

This meant that the government could continue to consider the traditional economies of scale and scope available from any particular supporting department and systems platform.  But it also meant that the government needed to develop a governance approach appropriate to e-Government – one that assumed variability in the needs of citizens creating multi-sided demands on government.  Thus government had also to consider the economies of alignment it could secure in the way it responded to the resultant variation in the forms of collaboration demanded of it.

In effect, the government had to change the way it was able to respond to its citizens.