It is only with the full relational form that the ethos of action learning has to pervade the enterprise as a whole. Up to that point, the assumption the enterprise makes is that it can rely upon Faustian pacts with individuals operating at its edges to deal with demands that go beyond the complexity of its own business models.

An enterprise differentiates its behaviors in relation to its environment to create value, while at the same time trying to sustain its identity through retaining some form of competitive advantage. How successful it is depends on the kinds of competitive asymmetry it can sustain, which in turn depends on its ability to integrate differentiated behaviors. The strategy ceiling is a way of thinking about how an enterprise does this. 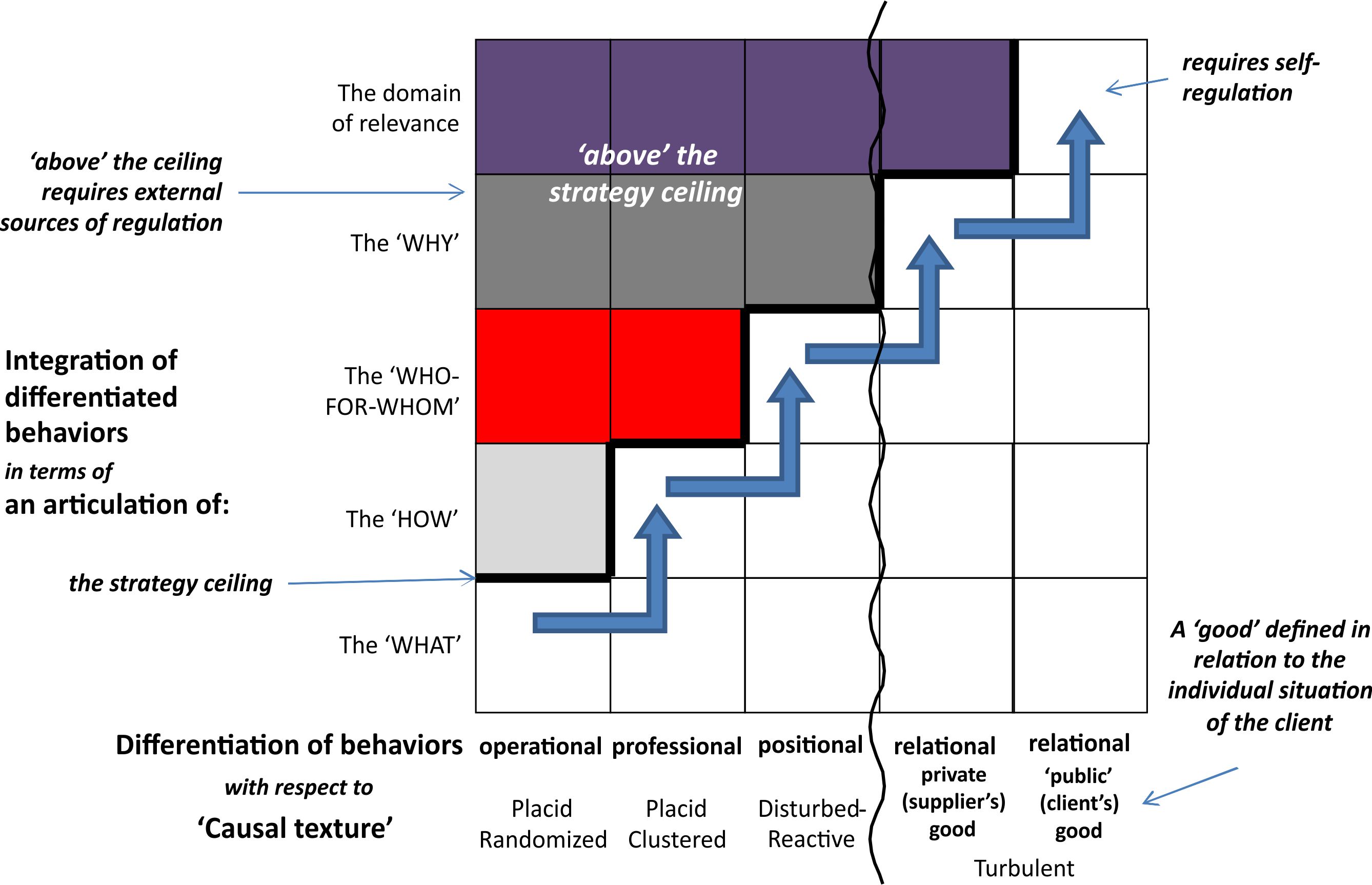 These layers stratify the relation between the enterprise and demand, and as these layers are progressively articulated, so the means of integrating the behavior of these layers needs to be progressively articulated.[2]  The result is the following five-by-five, in which each move to the right is an increasingly differentiated response to a demand for behavior at ‘run-time’.  And each move to the right  involves a lifting of the strategy ceiling.  The result is four different organizations of the relationship between the enterprise and its competitive environment, the last of which is further divided by the nature of the good that it serves [3]:

Of course the level of the strategy ceiling reflects the basis of authority assumed by those in control of the enterprise.  So each move to the right involves a different balance of power. In all but the last two columns, therefore, top management reserves unquestioned ‘sovereign’ rights over these assumptions. In the last two columns, what remains are assumptions about how the domain of relevance is defined for the enterprise.  For top management to put the good of the enterprise over that of its clients is defined here as the supplier’s private good. [4]

Considering just the middle three columns, a specific version of these strategy ceilings is described in Meeting the Challenge of Health Care Reform.  The progression is from a professional (treatment-centric) through a positional (episode-of-care-centric) to a relational (through-the-life-of-the-condition-care-centric) approach, the changes in the way differentiated behaviors are integrated being expressed in terms of architectures.

Footnote
[1] ‘Design-time’ is distinguished from ‘run-time’, the latter being the time of the dynamic operational interactions of the enterprise with its environment. Where there is a strategy ceiling there is an a priori constraint placed on the way the enterprise competes imposed at ‘design-time’ constituting the strategy of the enterprise as a whole. This is taken up latter in tempo, entanglement and east-west dominance.
[2] These strata emerge as a way of understanding the relationship of an enterprise to its edges – see finding the edge. They are further elaborated in the series of postings linked to by ‘So you say you want to put your clients first…’.
[3] Simon Western refers to ‘eco-leadership’ as an emerging characteristic of asymmetric leadership in his book on discourses of leadership. While he approaches leadership from the perspective of different kinds of social zeitgeist, eco-leadership is also a response to the leadership demands made by the need to sustain a relational culture, where the unit of analysis has to become the ecosystem and not the enterprise per se.  His other forms of leadership can usefully be seen as responses to the leadership demands of the lower strategy ceilings:

Of course the only reason for an enterprise to increase the differentiation of its behavior is on order to maintain congruence with its environment. Thus while Simon approaches the discourses in terms of their progressive emergence in society, the above relates them to the particular way identities are invested in the enterprise .
[4] Later versions of the ceilings includes another row at the top for the domain of relevance (see why is a stratification not a universal hierarchy). Whether or not this level is open to questioning or not depends on whether the good of the enterprise is put before or after the good of the client. This is the distinction between ‘guild ethics’ (the good of the enterprise comes first) and ‘professional ethics’ (the good of the client comes first) respectively. See, for example, Kenneth Pope’s address: The Code Not Taken: The Path From Guild Ethics to Torture and Our Continuing Choices