by Philip Boxer
I have always found Kolb’s experiential learning cycle a useful way of approaching the place of reflection in learning, for example in reflective learning, learning as a subversive activity, or judging the quality of development. But despite its being named as an experiential cycle, I never found it well rooted in the being of the person doing the learning. In what follows, I propose two ways of short-circuiting the cycle in order to more clearly distinguish learning rooted in the learner’s way of being. This can be done by introducing a gap between expectations and experience as an outcome from the concrete experience of the learner themselves: 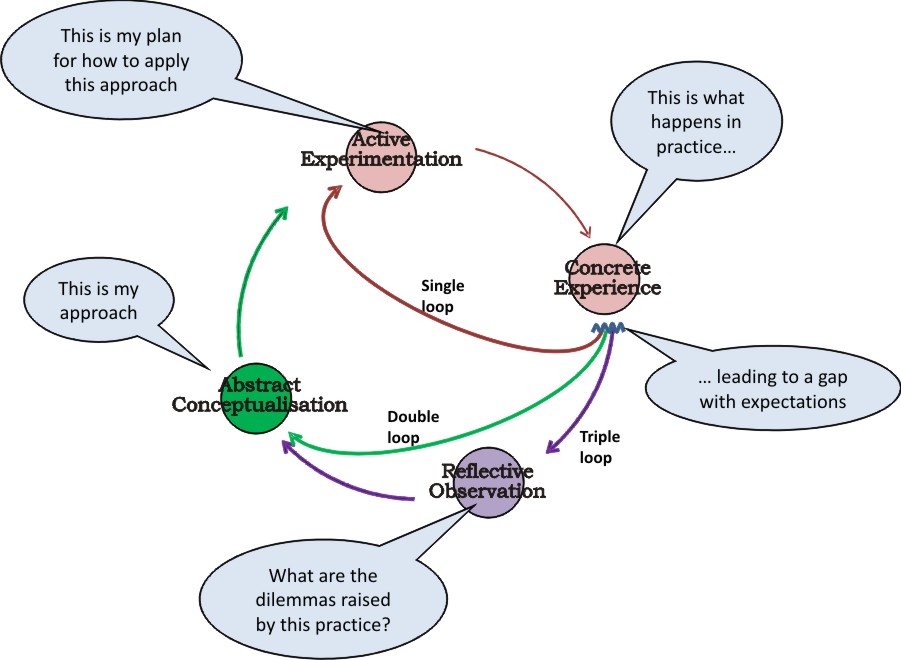 Three different kinds of response are identified to this gap, providing a useful way of distinguishing between single-, double- and triple-loop learning: [1,2]

The difference between double-and triple-loop is subtle here. If we approach our expectations of the concrete experience in terms of supply-side and demand-side perspectives, then it is the demand-side perspective that distinguishes triple-loop learning, placing the primary emphasis on the value deficit associated with the asymmetric demand in the situation itself, the asymmetry being understood in terms of emergent dilemmas.[3] The purpose of the ‘plus-one’ exercise is to provide a means of getting at what these dilemmas might be, and to identify their underlying impossibilites that may then drive network interventions..

Footnotes
[1]. A constructivist perspective on triple loop is to be found in Peschl, M. F. (2007). “Triple-loop learning as foundation for profound change, individual cultivation, and radical innovation: construction processes beyond scientific and rational knowledge.” Constructivist Foundations 2(2-3): 136-145.
[2]. It was Argyris who popularised double loop: Argyris, C. and D. A. Schon (1974). Theory-in-Practice: increasing professional effectiveness. San Francisco, Jossey-Bass.
[3]. To give more precision to this distinction, we will need to look more deeply into the nature of reflexive process.