Health Care Reform presents governments everywhere with a challenge. Richard Veryard raises the question here of whether the latest round of changes in the UK will be any different. Between 2002 and 2004 I was involved with colleagues in pathfinder projects, aiming to address these issues in the UK, the report on which can be found here. What follows is a summary of the nature of this challenge as we came to understand it.

The pathfinder projects were aiming to generate three kinds of benefit in order to deliver step-change improvements in the orthotics service across the UK’s NHS as a whole:

The pathfinders established that the scale of Type II benefits were significantly greater than Type I benefits because of the role of the clinic within the larger Primary, Acute and Long Term Care contexts. It was expected that this would be even more true for Type III benefits, but the pathfinder projects only got as far as delivering Type II benefits.  But how could these different levels of benefit have been achieved across the NHS as a whole? To answer this question we needed to understand the role of Architecture.

The role of Architecture
We discussed here a way of thinking about ‘Architecture’. When applied to the context of Health Care, we wanted to understand the way the different kinds of Trust determined the way that care was provided in response to patients’ demands.

The traditional approach to improving patient care was to focus on the patient journey through a succession of care pathways relating to the patient’s need for various treatments. For well-defined patient conditions, this meant optimising and aligning the process steps along care pathways in a way that was focused on the effective provision of treatments (i.e. a treatment-centric approach mirroring the way the NHS payment system focused on paying for treatments). These improvements affected the care pathway architecture within which treatments could be offered. Type I benefits were achieved by changing the care pathway architecture of the Orthotics Clinics, through such things as implementing clinical delegation and treatment protocols.

The pathfinder projects made a fundamental separation between care pathways and referral pathways. Care pathways defined the way treatments were provided, while referral pathways defined the way patients were enabled to find the treatments that they needed for their particular condition through the way their conditions were defined by doctors subject to processes of clinical delegation. The referral pathway architecture was affected both by the way care was funded – affecting the way the funding of clinics related to clinical specialisms, and also by the way clinicians themselves delegated clinical accountability in how they made use of each others’ specialisms in responding to a patient’s treatment needs. Such clinical accountability was exercised in relation to patient episodes of care focused on particular patient conditions (i.e. an episode-centric approach as defined by the ‘senior’ clinician involved).  Type II benefits were achieved by changing the referral pathway architecture governing the way patients reached the Orthotics Clinics, including such things as direct referral and universal review processes, both of which meant changes to the way clinical accountability was delegated.

Achieving both Type I and Type II benefits were essentially about how the Healthcare system responded in aggregate to patients. Not all patients could be responded to solely in terms of the condition that they presented with, involving multiple interacting conditions developing in ways that were specific to the patient’s particular context-of-life, for example being old! The multiple interacting conditions experienced by such patients could be reduced in their effects if approached on a through-life basis. Thus (for example) the screening of diabetic patients or of children with special needs could reduce the risk of later complications arising. To respond to such patients, pathways needed to be not just realigned to be more appropriate to current aggregate patterns of patient need.  They needed to be capable of being dynamically aligned in response to individual patients.  This involved creating a health risk governance architecture through which the different Trusts collaborating in the provision of care could make such dynamic alignment possible through the way budgets and clinical accountabilities were managed.

Each of these architectures depended on the excellence of the architecture at the level below it, and progressively changed the relationship to the recipient of healthcare from being passive recipients to becoming actively involved. Thus without improvements in care pathways, improvements in referral pathways could not be supported. Equally, without greater precision in the way referral pathways responded to patients, they could not support more dynamic approaches to managing individual patients’ complex of conditions on a through-life basis.

In other words, the levels of benefit needed to progressively build on each other as the architectures were progressively developed. In these terms we could distinguish three different kinds of approach to the provision of services to patients, each one of which delivered a progressively more complex type of benefit: 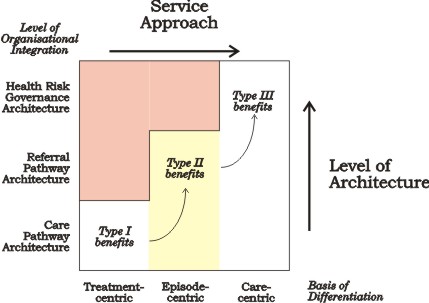 So how was architecture to be intervened on in such a way as to achieve these benefits?

The conclusion we reached was that a proactive, demand-driven East-West dominant approach was needed to achieving step-change; and that a North-South dominant approach, based on encouraging Trusts to make step-changes through implementing published best practice guidelines, would not work. Understood in terms of the following diagram, moving ‘across’ to the right involved responding increasingly to the particular needs of the individual patient, while moving ‘up’ involved changing the organisation of the architectures within which this responsiveness could be made affordable and practicable on a sustainable basis. 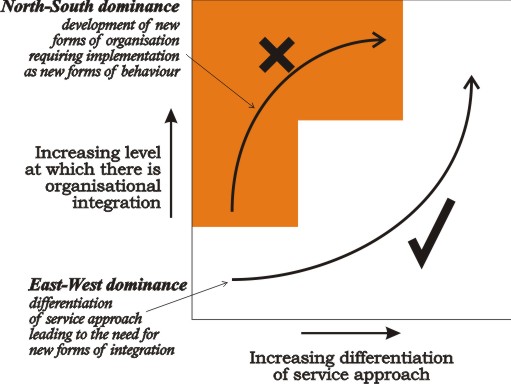 So what made this East-West dominant approach to change difficult for National Governments to implement?

There had of course to be sponsorship for the changes needed, both at the Trust level and at the National level, in order to create a context within which change could take place. But even given this, the demand-led focus on the need for change then had to be driven from the ‘edge’ by the specific needs of the patient through the life of his or her condition. This in turn required forms of support and transparency that could enable such change to happen, by providing funding for the transition, by providing support for this way of working out how to effect change, and by ensuring that the changes made can be sustained in a way that can be held accountable.

This meant being able to sustain power at the edge, and this was a 21st Century Challenge that Governments had not yet learned how to meet.

One thought on “Meeting the challenge of Health Care Reform”