by Philip Boxer
David Miliband, the Minister for communities and local government in the UK, spoke recently of the need for a double devolution that could bridge the power gap:

Central Government is the archetypal power-at-the-centre, placing local government at the edge facing the asymmetric demands of individuals and neighbourhoods. The ‘power gap’ is an acknowledgement of the failure of local government to fulfil the expectations of the citizen under a single devolution from the central to the local. So what is involved in a double devolution?

Building on the insights springing from the socio-technical nature of work within organisations, the Tavistock Institute of Human Relations developed a socio-ecological view of the relationship between the organisation and its environment, in which the community of organisations and the environment with which they interacted could be thought of as an eco-system. We can begin to understand the challenge of double devolution if we look more closely at the characteristics of this eco-system.

Understanding the challenge of double devolution
We can start from the double challenge, introduced in an earlier blog. This talks about the match between the relationship to demand needed and the corresponding (mirror-image) relationship to authority. This authority is associated with the business model being used to respond to demand, and in the following diagram we position this business model on two axes: 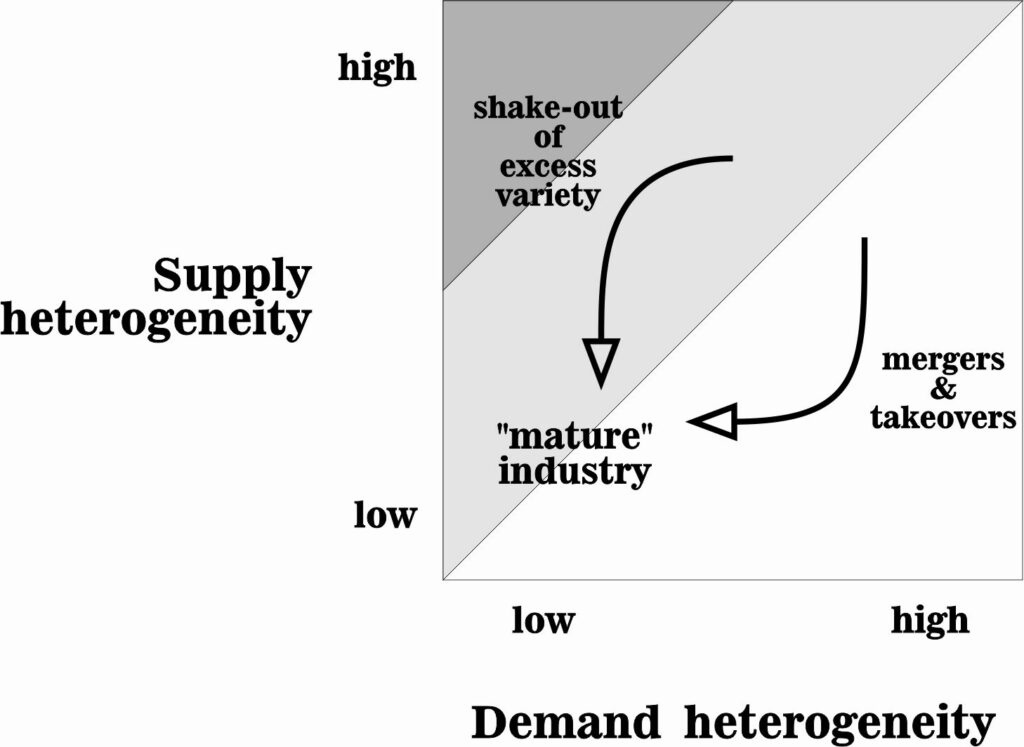 Implicit in the formation of this business model is also the bringing together of a number of knowledge domains. This allows us to introduce a third axis: 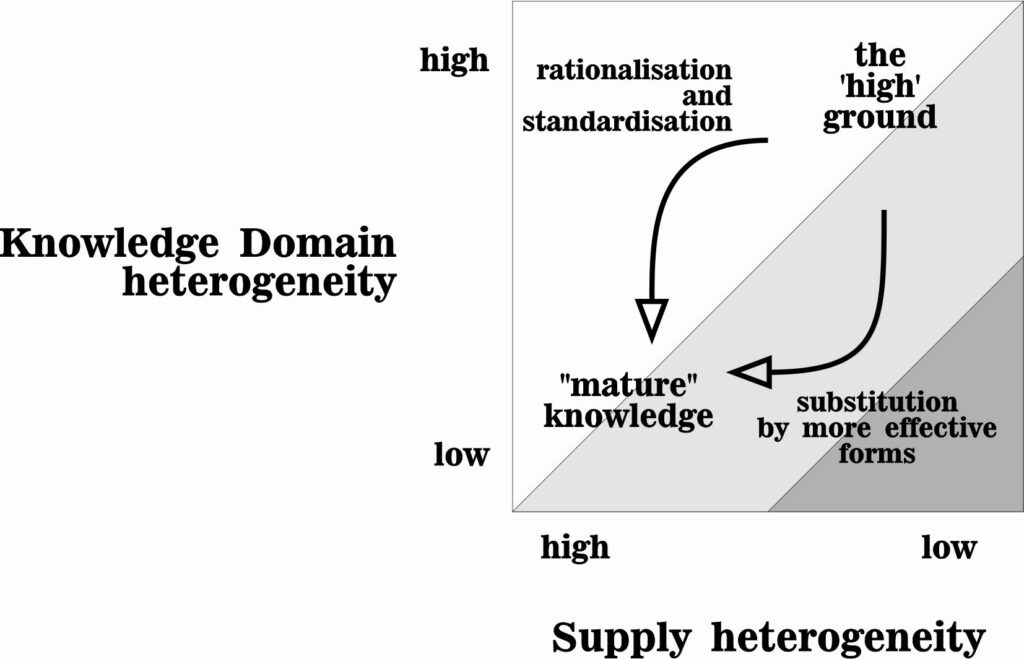 The ‘high ground’ is ground in which there is a low heterogeneity of suppliers using the business model, but a high heterogeneity of knowledge domains being used – ‘high ground’ because of the rarified status of the different professionals being brought together. From here there are two routes to the bottom-left ‘mature knowledge’ , where knowledge becomes ‘common sense’. One involves rationalisation and standardisation, reducing the heterogeneity of the knowledge domains as they become consolidated into schools of thought, and the other involves an idiosyncratic body of thinking being substituted ultimately by more widely held forms (therefore easier to replicate).

Put together, these axes allow us to define an equilibrium surface for the eco-system, in which for a business model to be above the surface is to incur excessive integration costs for the level of demand heterogeneity it is responding to, and to be below the surface is not to be able to respond adequately. The result is the surface below, in which we see the knowledge diffusion cycle associated with the governance cycle traversing the terrain from the high ground (problem-based) via establishing a school of thought (product-based) down towards becoming a mature industry (cost-based) and then turning back up under the overhang (service-based). What moves a business model down this path is the constant attempt to take out costs and to secure greater economies of scale and scope, while what moves it up the path is the pursuit of new forms of demand. But what causes the ‘fold’ in the surface, necessitating a jump to move in that direction, and possibly to start a new cycle? 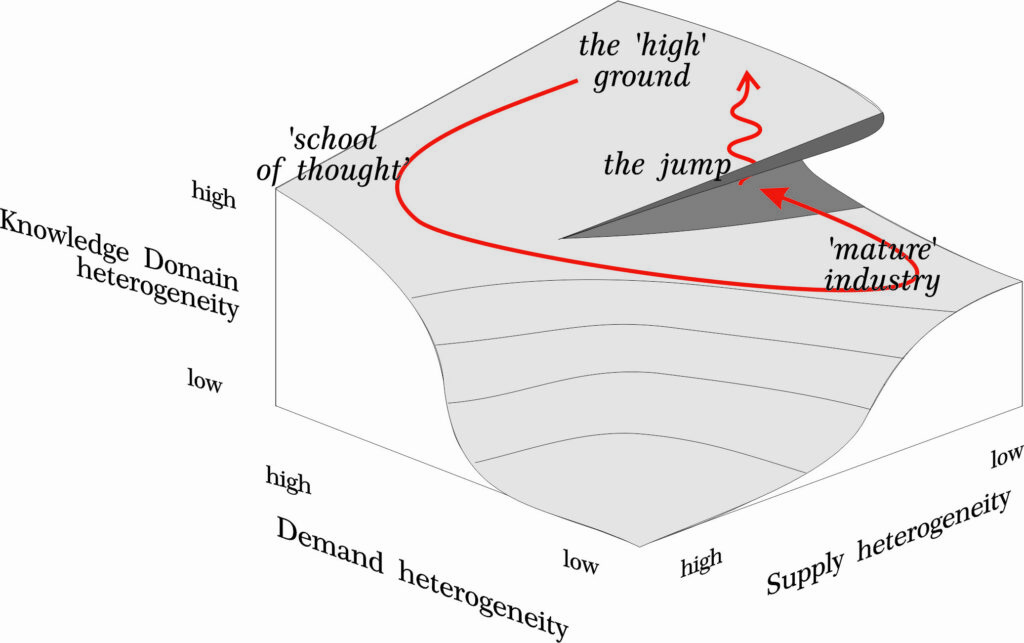 The ‘jump’ to a new high ground
To understand the ‘fold’, we must appreciate that the high ground involves a limited variety of forms of supplier being able to span a large variety of knowledge domains in relation to a large variety of forms of demand. Such a business cannot be organised using hierarchy, requiring instead an East-West dominant form of networked organisation able to hold accountability at the edge in a way that is situation-based. This means that there are points along the ‘demand’ axis where there are two viable forms of organisation, the depth of the overhang depending on the capabilities of the enabling the system-of-systems architectures. These enable hierarchies to customise their offerings to a wider variety of customers, as well as enabling networks to extract greater economies. 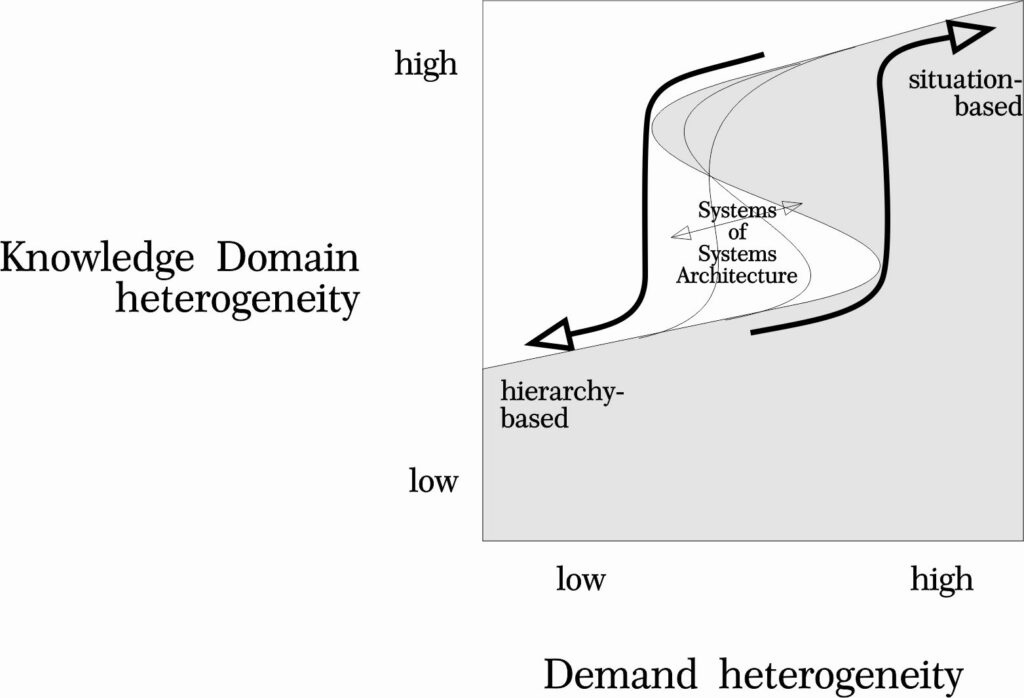 But despite this overhang, in order to capture greater varieties of demand, a North-South dominant organisation can only go so far before it must either refuse to engage with further complexity or make the ‘jump’ to a more adaptive and adaptable form of organisation. Which brings us to the question of the vortex and the consequences of such a refusal. Phil Swann, the director of the Tavistock Institute writes in an article on Public Opinion as follows:


“The chances of making progress on both elements of Mr Miliband’s double devolution would be enhanced if it was presented as a joint endeavour rather than a deal. Government at national and local level finds devolution difficult. They should agree to learn from each other as they grapple with the challenges.

His point is that double devolution has to be a two-way process, not only between the local and the central, but in relation to the individual or neighbourhood situation, and government is just not set up to work in this way at the moment.

The consequences of maladaptive responses
The progression along the demand axis was originally described by Emery and Trist in their 1963 paper on “The Causal Texture of Organisational Environments” (to be found in Vol III of the Tavistock Anthology), which at the ‘high’ end is described as turbulent. This is where the environment has a life of its own that can no longer be ignored by the organisation, i.e. it becomes asymmetric in a way that cannot be ignored. A vortex is what happens when organisations are not willing or able to adapt to this environment – they continue to ignore it, not because it is not there, but because they have no way of responding to it (see Baburoglu on the resultant maladaptive responses of stalemate, polarisation and monothematic dogmatism). A metaphor for the kinds of consequences that might follow from this refusal can be seen in the riots that broke out in Bradford in 2001, and across the French banlieue in 2005.

Must we fall into the vortex? It depends on whether we can find it within ourselves to start bridging the power gap by taking up the double challenge.