Richard and I have written about this at greater length in our paper on taking governance to the edge, and the concept of asymmetric governance. This is a form of governance in which those at the centre can no longer assume that they are able to know better than those at the edge what needs doing (there is more about how this relates to symmetric forms of governance in the blog on the governance cycle).

How is this to be understood? In the diagram below the points of the compass are used to distinguish four different aspects of what is being governed: 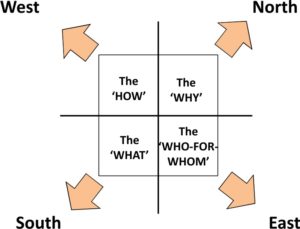 This now allows two forms of governance to be distinguished:

With it is apparent that what characterises N-S dominance is the presumption that the environment can be assumed to be symmetrical to the centre’s assumptions about it. This makes it possible to distinguish the faustian pact that can emerge when this in fact is not the case. This pact arises when the people on the E-W axis present what they are doing as if they are complying with N-S strictures in order to cut themselves some slack within which to do what is actually needed E-W. This can create a dangerous collusion between the people aligned to the different axes which ends up preventing the organisation from adapting to change. (I wrote about this under the heading of ‘facing facts: what’s the good of change’ within the context of the UK’s National Health Service, where doctors often find themselves having to ‘play the system’ in order to deliver appropriate care to their patients).

East-West dominance requires networked forms of organisation that can hold ‘the edge’ accountable for the way it uses the resources of the supporting organisation, but in relation to the situation in which the demand is arising. This contrasts with the hierarchical forms associated with N-S dominance. What is at stake is the performativity of what is done in relation to the demand at the edge, rather than the performance of what is done against centrally (symmetrically) defined criteria. It is not that hierarchy isn’t still necessary, but rather that it has to be situationally rather than universally defined. That’s where asymmetric design is needed.