by Philip Boxer
What follows is a contribution to the work I was doing with Barry Palmer on Congregational Profiling. Aspects of this work were published subsequently in his paper: Holy People, Holy Place: Images of the Synagogue and its Leadership in Progressive Judaism.  The underlying question was to understand the impact of secularisation on the congregation, and how to work with its effects:

What do we think we are doing?
When we met, you had two particular questions to work with:

As it turned out, we spent most of our time talking about some ways of thinking about what might be going on for congregations, and we parted with you still carrying some anxiety around what to do next.

Having talked since, we have ‘placed’ this same anxiety in relation to the “footnote” you wrote following the conversation with Beit Klal Yisrael. The comments I made were that:

The challenge I think we face therefore is to find a way of understanding what we think we are doing, both as ‘ourselves’ in the situation, and through the form of the intervention.

In what follows, I try to elaborate the thinking behind the attached set of diagrams; before returning to the nature of this challenge, and what it has to say about your two questions.

In thinking about for whom this intervention is being conducted, we can use your distinction between holy people vs holy place. The hypothesis is that “Subscribers” are dominantly concerned with “holy place”, insofar it is they who actively underwrite the continuing viability of the place.[1] They overlap two groupings: at one end of the spectrum, we have “potential congregants”, which would be anyone within some notional idea of being in a catchment area and who, by virtue of their present or past family connections, is a potential congregant.

At the other end we have active congregants, who I will take to be anyone who takes any active part in the work of the synagogue – as in your “holy people”.

I think that our intervention has to be neutral with respect to this spectrum as a whole, and has to look for ‘stories’ which bring it to life as a whole.

What do congregants hunger for? 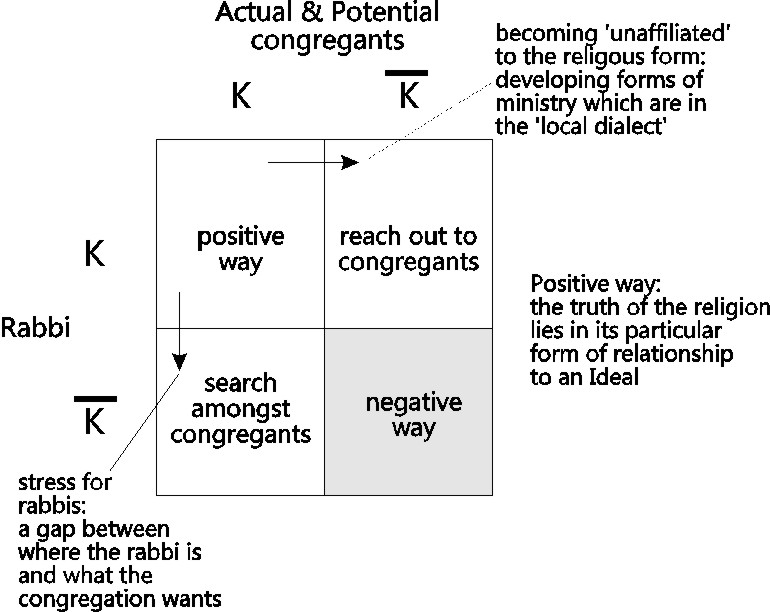 So the positive way is one in which the expectations of the members is that the truth of religion is accepted as lying in its particular form of relationship to an Ideal, in relation to which two directions are apparent: one in which the Rabbi’s knowledge is taken out to potential congregants who do not have the Rabbi’s knowing; and the other in which, within the context of the congregation’s certainty about the nature of their knowledge, the Rabbi encounters his own not-knowing.

It is in the nature of these two directions of movement that the former involves developing forms of ministry which ‘reach out’ in the sense of speaking in local dialects; and the latter leads to some separation between the Rabbi’s and his congregation’s relation to their truth(s).

The negative way constitutes an ethical break with the positive way in which a different kind of relation to religious truth is established: one in which both Rabbi and congregant problematise the possibility of knowing, and therefore the way of being-in-relation-to-G-d.

I don’t think it is possible for us to sustain this intervention other than by seeking to hold this ‘fourth’ position. 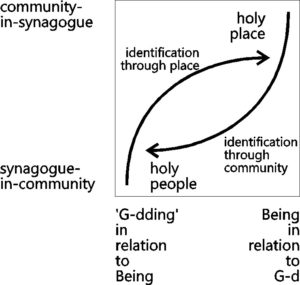 If we consider a religious space defined by the relation to the positive way, then the vertical dimension articulates the way in which the Rabbi is experienced by the congregation. With synagogue-in-community, the synagogue qua place is incidental to the nature of the religious process which is the community. In contrast, community-in-the-synagogue would be a drawing together of the community in the place – equating the role of the Rabbi with the operation of the place.

I have presented the two trajectories in that form to reflect the following hypotheses about religious processes within the overall context of a positive way:

So here is some kind of oscillation taking place. I don’t mean to imply that the other two ‘quadrants’ are not occupied. But ‘G-dding-in-relation-to-Being’ in the synagogue seems to represent a particular challenge to the role of the Rabbi, while ‘Being-in-relation-to-G-d’ in the community seems to represent a particular challenge to the living of the Rabbi…. in other words, this oscillation appears to be defined particularly within a context defined by the Rabbi. Perhaps the profiling project will shed some light on these other possibilities that appear not really to include the Rabbi.[2]

It seems to me that, unless we want to adopt some unidirectional/evolutionary model of how the religious life of a community develops, we are going to need some form of cyclical understanding. This is an attempt to build on your own holy people x holy place ‘take’.

The effects of secularisation 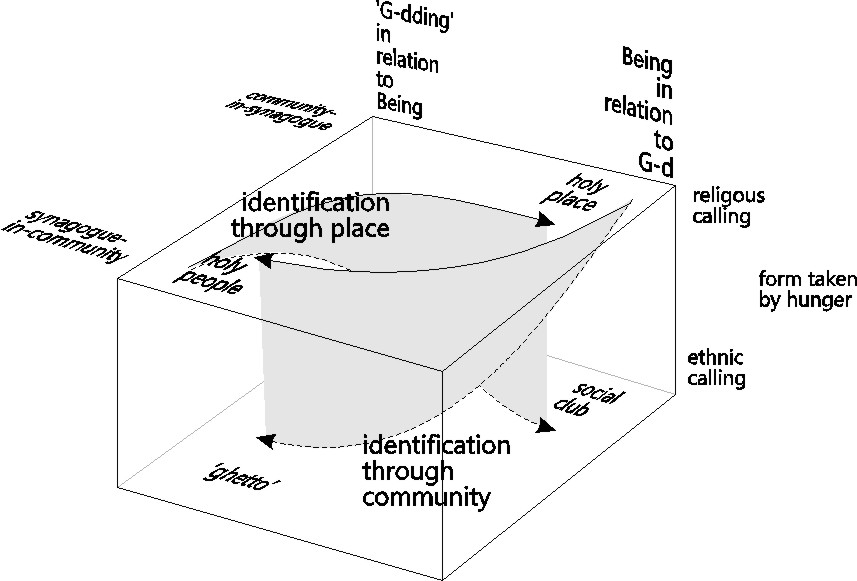 If we now add another dimension, concerned with the way in which the ‘hunger’ is recognised, then by ethnic calling, I mean that there is no strong sense of the religious. The ‘entropic’ process of falling away from the religious calling is associated with the trajectory from holy place to holy people becoming to ‘ghetto’. Equally, the same process results in the trajectory from holy people to holy place becoming a social club.

The implications of this elaboration of the oscillation is to suggest a much greater importance to the symbiotic relation between the two forms of identification.[3],[4]

Your questions
So what do we think we are doing – in the sense of what is the basis of our intervention? I would want to say that it has to do with pursuing our own negative way in relation to this client system.

Why should the client system want us to be doing this? Because its experience of you is that you work with them in a way which enable them to open up and work with questions which are important to them. The danger you face in this is one of being pulled out of an orthogonal relation (i.e. to lose the basis of your intervention as being in the negative way)……

How then to engage with congregants’ concerns?

This process of making sense could take the form of some kind of working conference.

Notes
[1] Is there a form of subscription appropriate to an orientation towards ‘holy people’?
[2] It seems to me that the thinking concerning the impact of the ‘sovereign self’ on being Jewish is precisely such a development. [This is the concept developed in ‘The Jew Within: Self, Family, and Community in America’ by Cohen & Eisen, Indiana University Press 2000.]
[3] But is there a different way of moving depending on which identification is dominant? [This distinction, between ‘people’ and ‘place’ can be understood in terms of the distinction between an imaginary identification (ideal ego) associated with taking up the practices of a holy people, and a symbolic identification (ego ideal) associated with taking up the forms of relation-to-G-d implicated in being a holy people.]
[4] This relation to spirituality may be approached in terms of the third relation to the Real aka the relation to objet petit a that is a relation to what remains lacking – the particular form taken for the subject by Das Ding/the lost object. For more on the effects of secularisation aka a refusal of this relation, see the blog on the refusal of symbolic castration.