by Philip Boxer
The word ecosystem is beginning to be used for a clustering of competing services around shared resources (see for example “The Move to Web Service Ecosystems”, BPTrends November 2005). Good examples of these competing services are provided by programmableweb, which tracks the ways in which mashups are being built from supporting APIs. John Musser very kindly provided us with some of their data, and we have produced the following interoperability landscape from it.
The underlying data is a matrix of mashups against APIs, so a high ‘q’ shows an API as being used by a large number of mashups (e.g. Google Maps). And for any given level of ‘q’, we can then identify the number ‘k’ of other APIs used by that number ‘q’ of shared mashups (e.g. Amazon, Flickr and del.icio.us at q=5). The result is a landscape in which the clusters of peaks and foothills indicate ecosystems of mashups built around common APIs. In the landscape we have picked out three ecosystems which stand out particularly – it is enlightening to see how Microsoft’s exclusivity is reflected by the isolation of its ecosystem, although what this doesn’t show, of course, is Microsoft’s dominance within corporate silos: 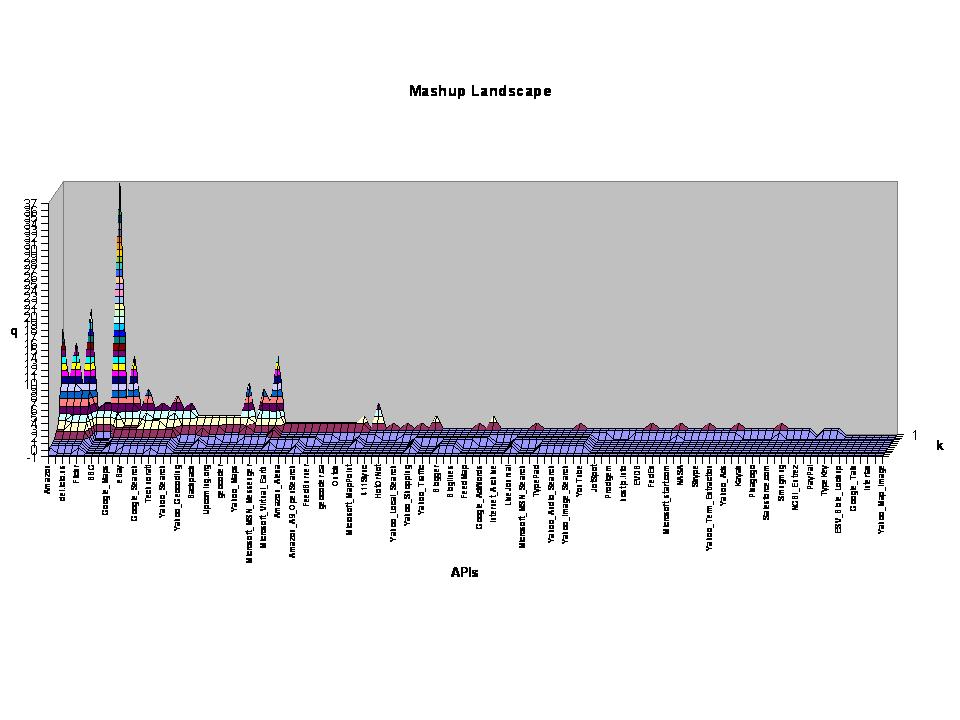 This visualization of an interoperability landscape is a powerful way of showing the value that comes when things are combined with other things, in this case describing a layer mediating between the demands of users within their contexts-of-use and the supply of services from APIs. We are interested in using the underlying form of analysis to understand how particular new forms of demand span gaps in the existing landscape. These gaps may identify opportunities to support new forms of demand, so the next stage would be to look more closely at the existing forms of demand being satisfied by the mashups. To do this, we would need to characterise the different kinds of demand situation these mashups are responding to, described in terms of different kinds of context-of-use rather than another level of (aggregated) functionality.
We are dealing with a kind of cycle here (as in the paper on asymmetric governance) in which mashups are most likely to be where new forms of interoperability can get established, corresponding to the emergence of “pull” models of business.